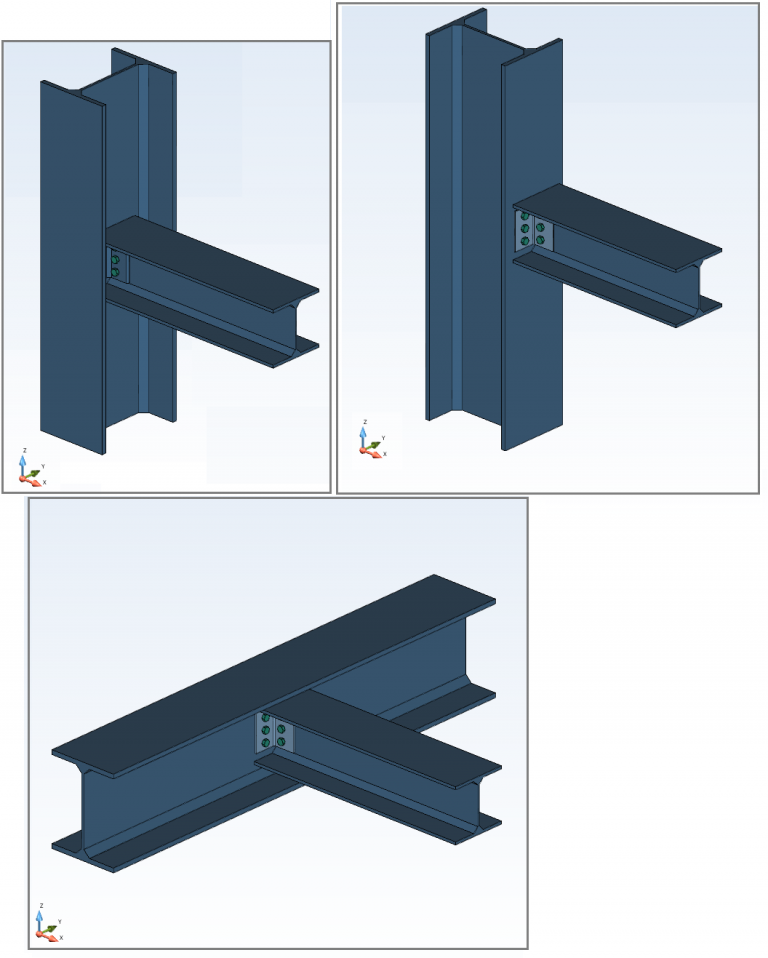 Clip Angle connections are used for connecting a floor beam to another beam, or a column to a beam. The attached beam can be sloped to the main one. The angles are bolted or welded to the main beam. 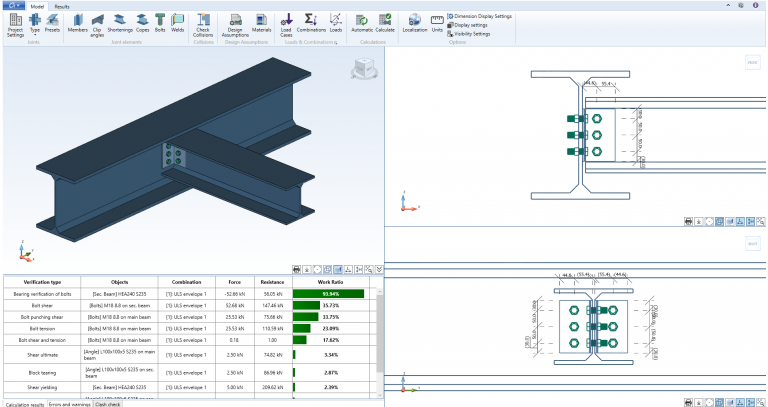 You can customize each joint element using the available buttons from the Joint elements panel. All changes made in every window can be viewed in real time. For example, you can define the geometry of the clip angles, copes, set the configuration of bolts and customize the welds (thickness, type and quality) for each part of the joint 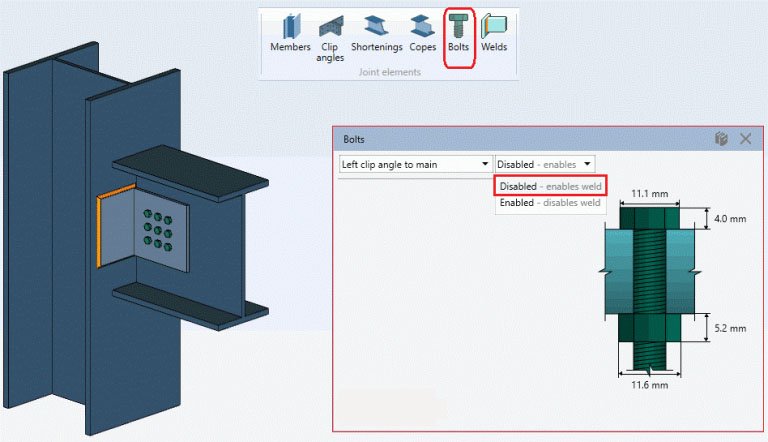 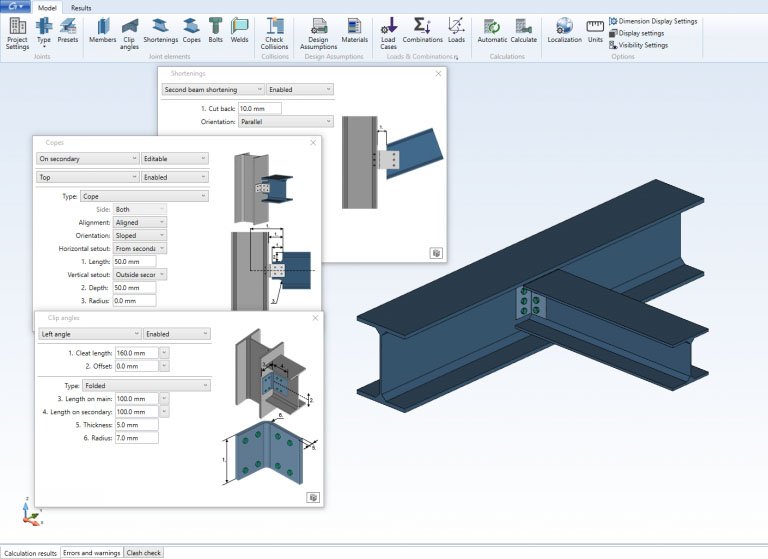 The dimension lines that contain values between parenthesis cannot be modified and correspond to the grayed-out values that appear in the element dialog. For example, the user can change the bolts positioning directly in the views for values that are not grayed-out in the bolts dialog.

Main member of the joint can be set as beam or column, using the radio buttons available in the dialog. 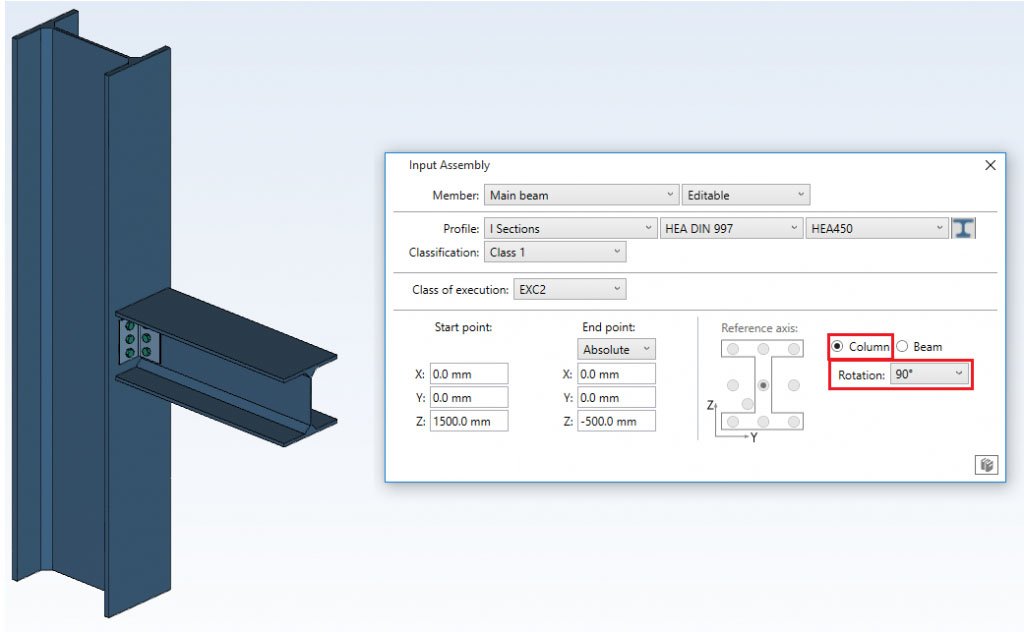 The “Third beam” can also be used by simply enabling it.

After defining the joint elements, the users have the possibility to choose the material for each element according to different standards and set the following steel design assumptions: steel corrosion, control of the shear planefor bolts (threaded/ unthreaded), weld design method and give values for the safety factors that will influence the calculation results. 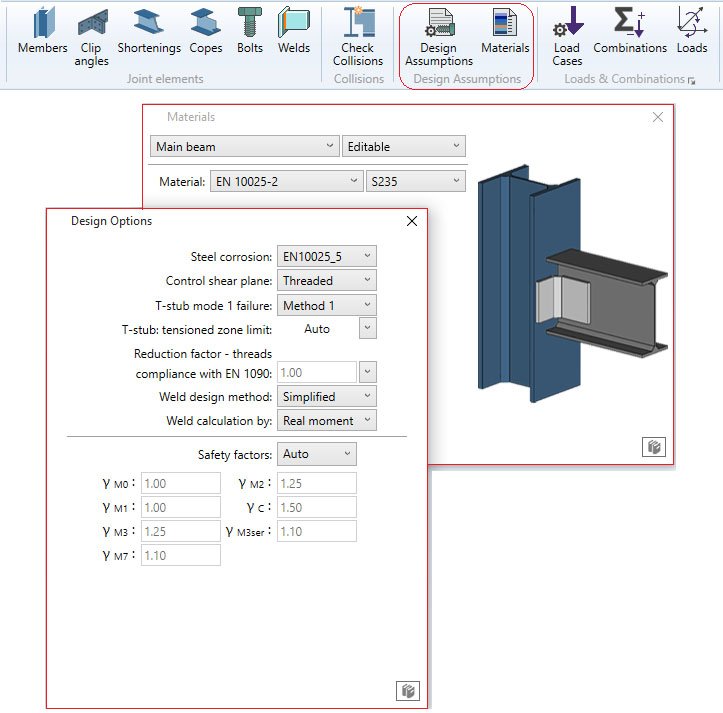 Users have the possibility to define load cases, load combinations and add values for the loads (N - axial force, M – bending moment, V- shear force). The sign convention is displayed in the Loads dialog for each joint type. 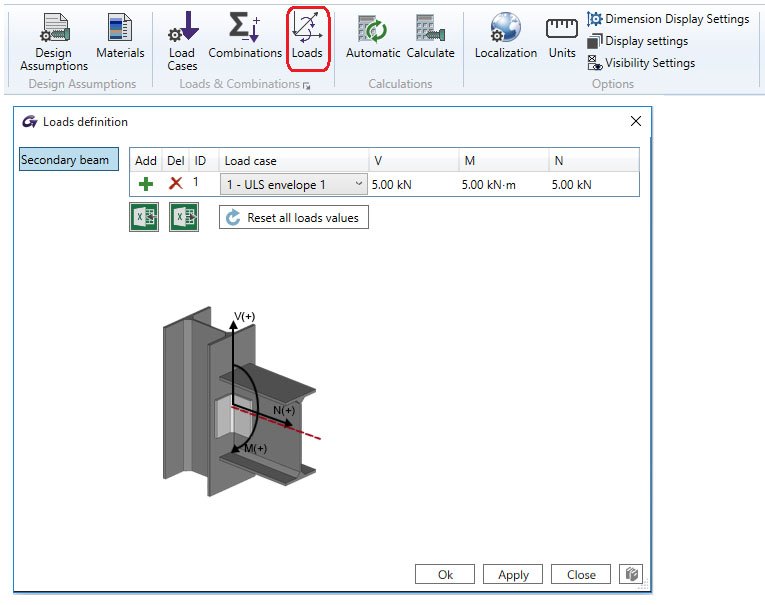 The users can add different load cases from the available list. Also, the envelope load case doesn’t require any combination, because it is interpreted as a special load case that has the meaning of a combination which consists only of the maximum value of the efforts. For example, the user can define an envelope case that can provide the maximum axial force, maximum shear force or maximum bending moment. 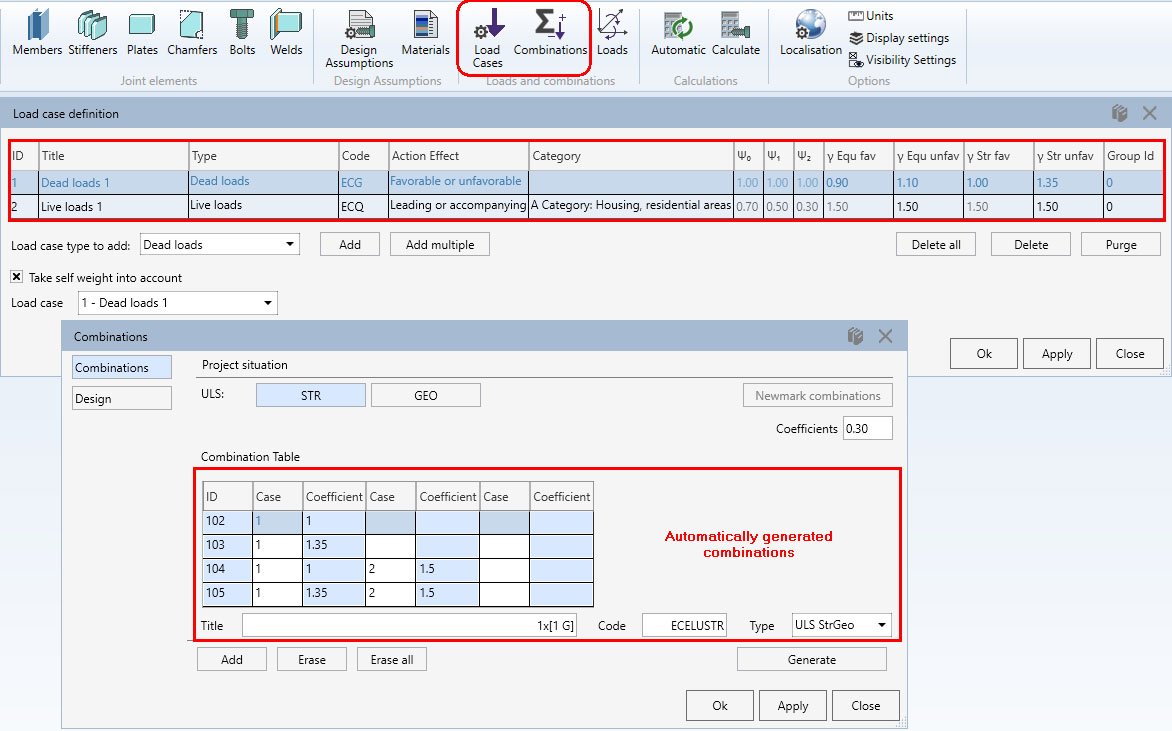 For the calculation of connections, Advance Design uses Eurocode 3 international design standards, for all the connection components verification: bolts, welds, plates, etc. and parts of the connected elements, beams web, and flanges. 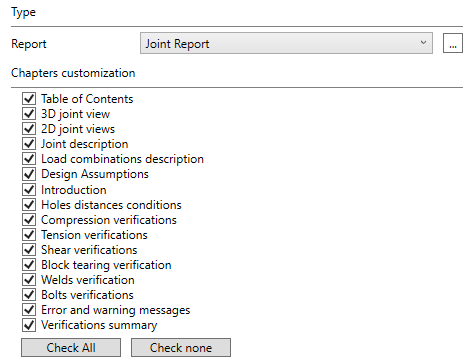 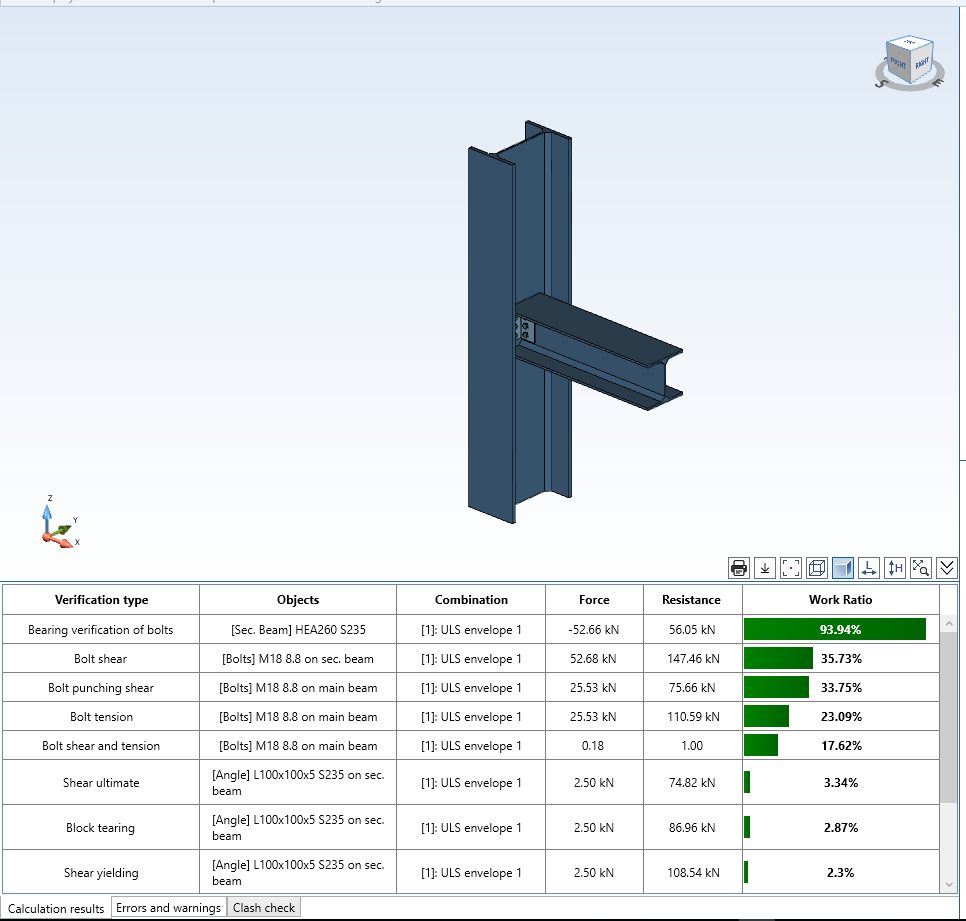 If the calculation shows that some connection components (angle, beam, column, weld) have failed verifications (a work ratio >100%), then such elements are colored in red on all views.

This helps identify easily all elements that should be reviewed without checking the report and makes the connection design process much easier. 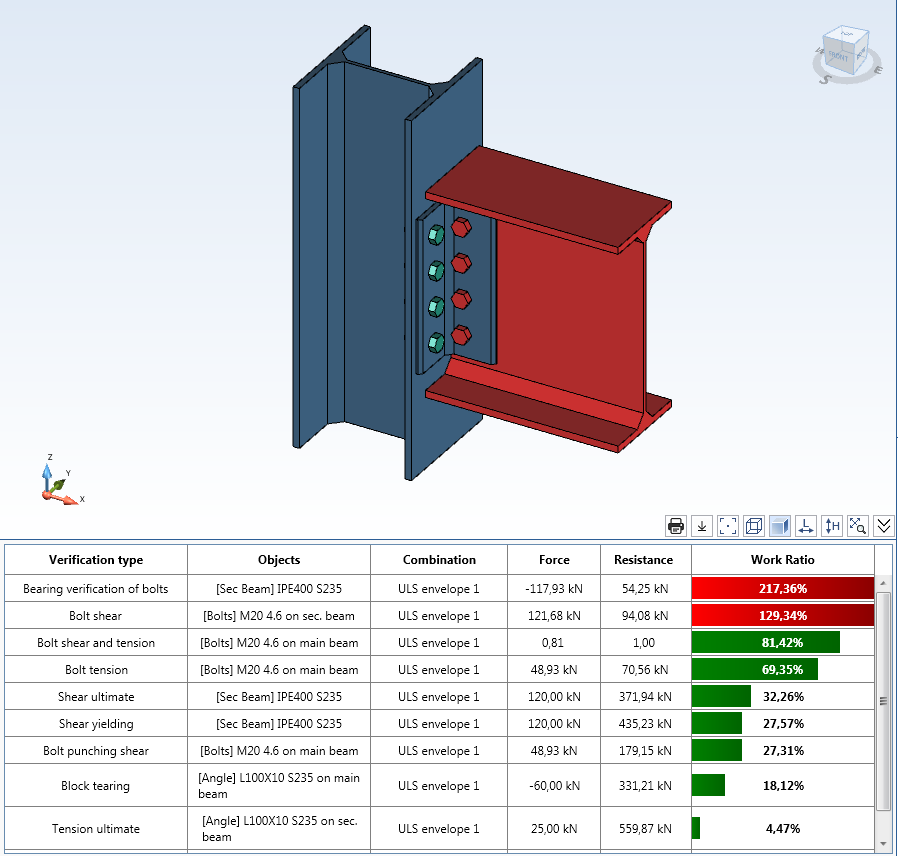 The user can obtain a generic connection drawing (elevation and sections), which can further be exported and adjusted in other CAD software. 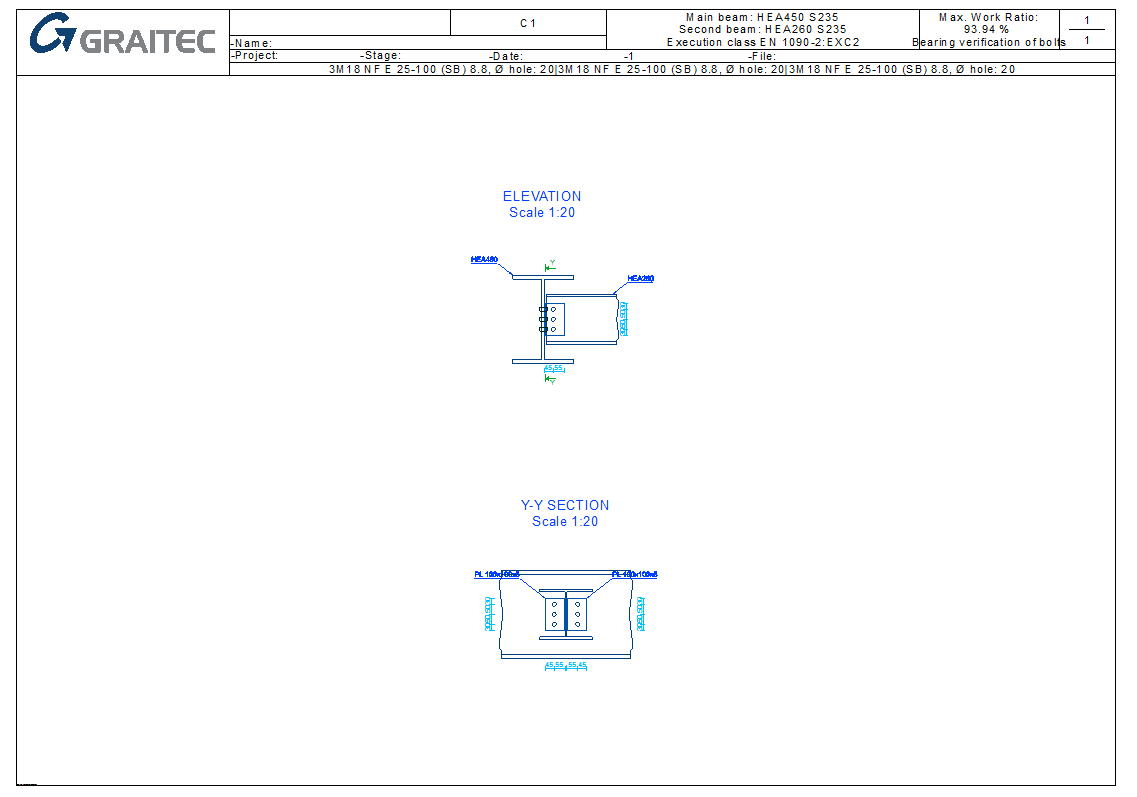 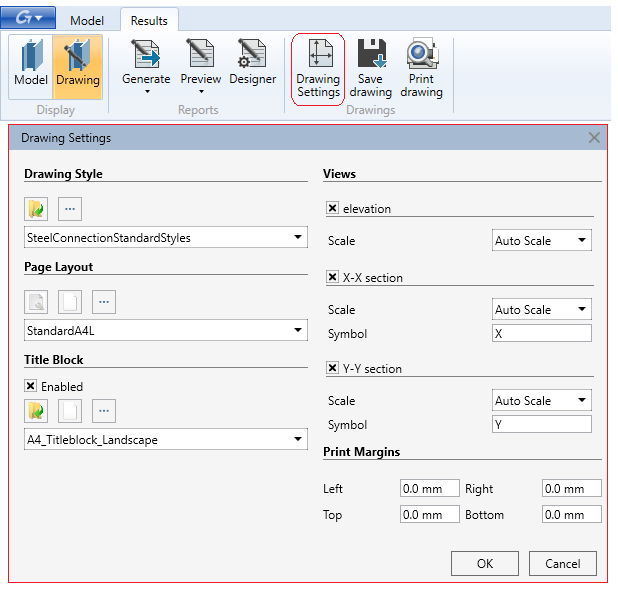 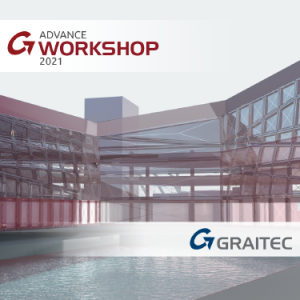 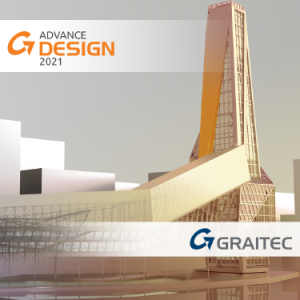 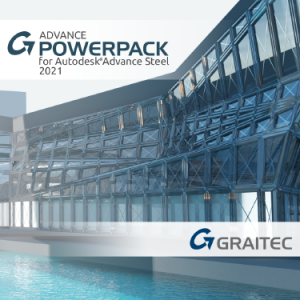 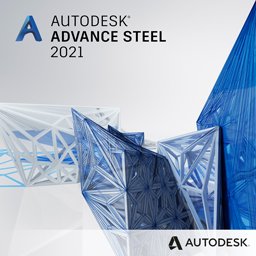